We woke early to take advantage of the early morning food market.  Weaving in and out of buyers and sellers of all generations, the air was alive with the sound of different languages being spoken.

We stopped at the fruit stall to admire the colourful and diverse assortment of produce on offer when the fruit seller asked a question in Spanish.   Without hesitating, my eight-year-old son replied ‘Yo no hablo Español’.

She seemed impressed.  As was I.

He went on to order a mango in pigeon Spanish and thanked the lady.  The few punters hovering around the market stall smiled at him as he handed over €1,50 from his wallet and walked away proudly with his little mango in a paper bag. 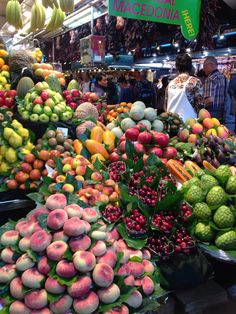 Back at the van, he carefully cut the mango into decorative little squares and placed them in a bowl for us to try.  Apparently, he learnt this skill watching Jamie Oliver.  The rest was packed in a small bag, together with a few sandwiches and our towels ready for an afternoon at the beach.

Once at the beach, Lola entertained herself by collecting various rocks of different shapes and sizes.  Using a large stone she cracked each of them in two, exposing different coloured layers inside.  Fascinated by her discovery, she discussed the possible reasons with her Dad.  Between them, they tried to fathom geological explanations for the phenomenon.

I smiled to hear them both share a genuine interest in the Earth’s systems and how geology plays its part in understanding some of the world’s most notable natural disasters. 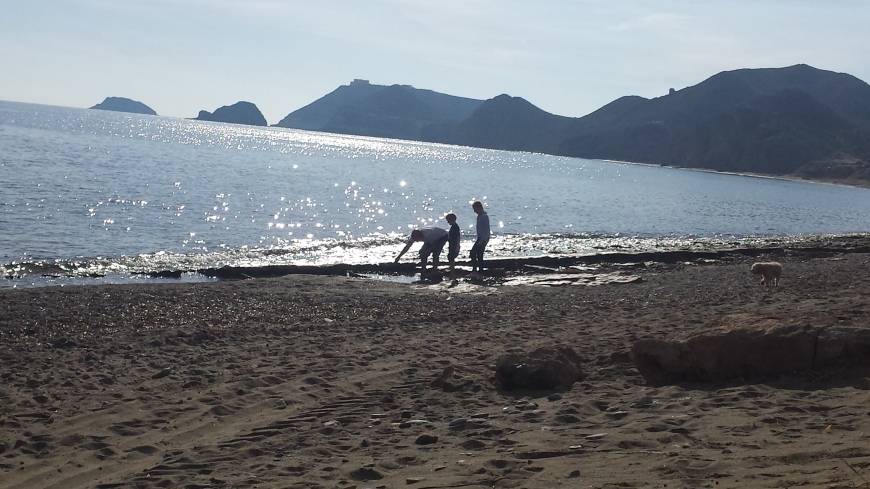 Whilst Lola and Chris hypothesised, Jonah and I sat on the sand watching the waves.   For the next hour, I was able to show him the all-important signs of a rip current by observing the wave patterns, sea colouring, the flow of debris and the churning of choppy water behind the breaking surf.

As a mum of a fearless son with a new passion for surfing, I was grateful for the opportunity to show him the hidden dangers of the sea without coming across as a fun-wrecking, over-protective worry-wart.

In the evening we cycled to Peniscola; also known as the ‘City in the Sea’.  Its 13th century Castle was built by the Knights Templar on the foundations of an Arab fortress (You may remember it from the 1961 filming of El Cid?).

The castle was lived in by Pope Benedict XIII (Papa Luna) for 6 years when he was deposed from the papacy.

During a tour of the castle, we heard how his name lives on in a cavern called the Bufador de Papa Luna where sea water is thrown up in clouds of spray.

We traced our fingers over an original carving on the castle door by the Knights Templar before cycling into the old town for a taste of Mexican cuisine.

Over nachos, guacamole, quesadillas and tortillas we discussed how the Knights Templar were responsible for the Skull and Crossbones Pirate Flag and our superstition of Friday the 13th.

Chris described how King Phillipe, with the help of a new Pontiff by the name of Clement V, ordered a surprise dawn attack on the 13th October 1307, successfully capturing all French Templars and seizing their goods.  The kids listened raptly to the gory details of the Knights confessions at the stakes before they met their fiery deaths.

Later in the evening, we cycled home by flashlight and decided to agree on the next leg of our adventure over a hot chocolate before bed.   It has become a family tradition to congregate at our small table, strewn with maps and books, to track our route across Europe and agree our next campsite or aire.  Once decided, the kid’s input the longitude and latitude GPS coordinates into the Satnav, ready for the morning.

We went to sleep dreaming about the next destination, and all that it has to offer.

Why this story?  Well, this is just one memoir of a randomly selected day from the past two weeks.  I have many more I could recount but I shall spare you the boredom.

The reason I selected this particular day is because I wish I could recite it to every person who asks me ‘So, what about the children’s education?’

Not a day goes by without a fellow traveller questioning our children’s education.  I answer politely with the same story about their schools and an apathetic Education Welfare Officer – because that is what they want to hear – but truthfully I want to reply ‘And by education, you mean…?’

They are often nice, well-intentioned people so I don’t want to upset them, but really, what is education?

Well, when you type that question into Google the first thing that comes up is;

“The process of receiving or giving systematic instruction, especially at a school or university”.

(Sadly) the second is;

Surely this is in the wrong order?

I read an article this morning that said ‘Learning is both a process and an outcome. As a process, it is part of living in the world.  As an outcome, it is a new understanding or appreciation of something’.

Isn’t that what we are doing?  We are showing our children the world – allowing them to experience the wonder of it.  They are learning about languages, culture, cuisine, climate, geography, history, religion and science by feeling it, seeing it, living it.

Education should not be confused with ‘schooling’.  Schooling, in my opinion, is the process of drilling knowledge into people according to a drawn-up plan.

Education, as John Dewey (1916) so eloquently put it, is a process of inviting truth and possibility, of encouraging and giving time to discovery. It is a social process – ‘of living, and not a preparation for future living’.

So, No.  My children do not attend school.  If I had it my way they would never attend another day of school in their whole life.

It’s not that I think they have been failed by teachers or that schooling is ineffective.  Quite the contrary.  It is because I want a different life for my children.

Is it wrong as a parent to admit that I never hoped my children would become the next Lawyer, Doctor, Vet, Accountant, Teacher or Politician?

I always wanted so much more for them.  These ‘jobs’ are not a sign of ‘success’.  Not in my book anyway (especially those that require you to leave your moral compass at the front door).  They are well-respected professions, for which there is a general acknowledgement that someone studied hard to achieve them.

I was furious then.  It still infuriates me now.  But it also saddens me.

Our children, from the earliest of ages, are prepared to become a product of a machine.  A machine that churns out generation after generation of people who become trapped in the monotony of the conveyor belt…

Go to school.  After school, go to University.  If you are lucky after University, find a job.  Work for the rest of your life.  Have a family.  Save for your retirement.  Retire.  Die.

Next generation – School…University…work…family….and so it continues.

If you are fortunate, you may be able to squeeze in the odd family holiday abroad or even be gifted 30 days paid annual leave.  We assume good health because our promised rewards for a lifetime of hard work waits for us at an age when we are probably too old to enjoy it.

I’m not knocking it.  We have been there (God forbid we go back to it).  I appreciate how hard it is to break the cycle; say no to the machine.  Heaven knows how hard it was to walk away from our salaries and our ‘security’.

I’m just saying, that it doesn’t have to be that way.

My only advice to my children has always been this – Do what you love.  Become an Expert in it.  If you become an Expert. Money will follow.

At the age of 12, my daughter is already fast becoming an expert on dogs.  She has studied them all of her life because dogs are her love, her passion.  There is not a breed she doesn’t know.  She studies their history, their origins, their temperament and their body form.  She even enlightened Professor Noel Fitzpatrick on a new breed last year!

But every time she tells somebody that she wants to work with dogs, they reply ‘Oh, you want to be a Vet?’

Why do we do that?  Why a vet?  Because that is a sign of success?

Lola has never wanted to be a vet.  She wants to save unloved dogs.  And I have no doubt that if she chooses to save dogs for a living, she will be the best, and happiest bloody dog-saver on the planet!  She may not be rich in terms of money, but she will be fulfilled. And I will be a happy mum.

Remember, sometimes, some people are so poor, all they have is money.

So, success for us is no longer about what you know; how many facts you can regurgitate, how many A’s you can achieve, how much money you earn, consumerism, material wealth or how early you can retire.

And Education isn’t about sitting in a classroom in a school.

Don’t get me wrong, I would like to thank the many teachers who taught my children how to read and write – these are essential life skills – but I do not agree that ‘education’ starts and ends with schooling. There is a difference.

The world IS our classroom!

Perhaps this is how I shall address the next inquisitive traveller?

5 thoughts on “So? What About Their Education?”

Follow Not All Who Wander Are Lost on WordPress.com